I was pretty shocked walking by a bus shelter with a couple bags of perfectly good food sitting there. Had they fallen out of the bag? Forgotten by someone?

These were sitting here — not staged, moved or altered.

Who would do that? 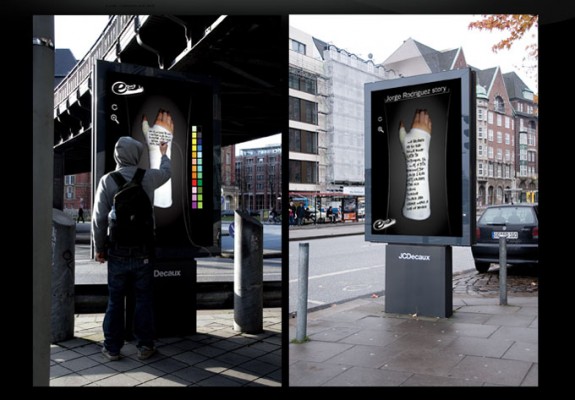 I am one of those people who enjoys public transit. Yeah, it takes me 45-60 minutes to get home (merely 6 miles) but in that time I’ve made phone calls, caught up on my news, updated my Facebook — all while not breaking the texting laws nor blowing a stop sign. But that doesn’t mean I don’t like entertainment in the Decaux bus stops.

So a while back, Artistic Things posted this very ingenious idea at a bus stop in Hamburg, Germany (unconfirmed). And apparently it wasn’t even the Sharpie folks (as you see from the surprise on their own blog). Super-clever use of the technology. I can see using something similar at a tradeshow booth even (if you don’t want to spend the money on public adverts). Very cool stuff, folks.