At intermission the concert has been delightful. The Shostakovich piece was strange but fun. There were aspects I wish would continue but alas they don’t. On to the Rachmaninov, a short 56 minutes non-stop.

In addition to an amazing concert, I met a new friend who I sorta scooted closer to halfway through the concert.

Here’s what happened. Mark Elder, a UKian composer, started the concert as most do. He started conducting without much fanfare. At the end of the first piece (Delius, A Song of Summer) he did what other conductors (with the exception of John Williams) never does: he spoke to us! He introduced the next piece (Sibelius, Symphony No 6) and made it so interesting I couldn’t wait.

Intermission came and went rather quickly, with me staying put. When the lights brightened on the stage, he came back up and introduced the next piece: Webern’s Five Pieces for Orchestra. Total time: 4 minutes. An entire symphony in just four minutes. He captivated me and I was DYING to hear it. He then invited us to stay after the concert to come ON THE STAGE and hang out while they re-played the piece. Totally, totally amazing.

And that’s where I met Mary. She was visiting on an off night. We went on and on and on about Elder and how we were planning to write the CSO to tell them how we felt. We continued our conversation on the bus and I rode home in bliss. It was a great night for symphony. They need a conductor like Mark Elder permanently.

Getting ready for the last concert of my series Vivaldi’s Four Seasons. The choir is setting up where the orchestra usually hangs out and I’m on the main floor instead of the terrace. Nice seats all the same.

A triple header today, hearkens back to the days when I would see four to six movies in two days. 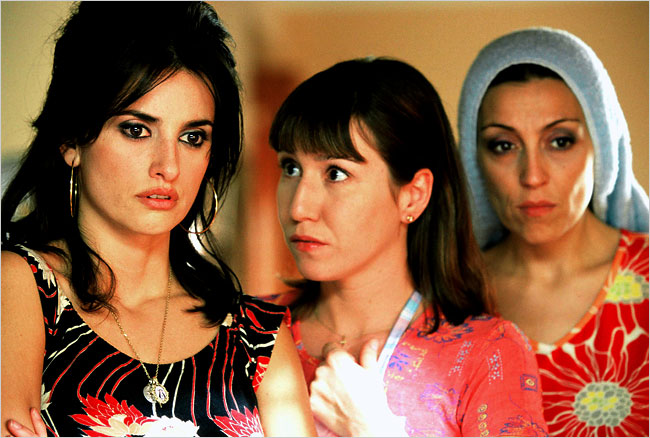 First, Volver. The lagrima and joy in a Pedro movie makes me want to call my mother and bawl my eyes dry. This latest one is a beautiful homage to motherhood, perhaps moreso than Todo sobre mi madre, a movie that is most definitely in my top five. The soundtrack my Alberto Iglesias is tremendous and is on order already.

A brisk walk east to Sheridan, a frosty ride south on the 151 Sheridan to Symphony Center. A quick stop at Panda Express and I am ready for symphony. Tonight Zinman is conducting movie scores from 2001: A Space Odyssey. I own the movie on LaserDisc but never paid it much attention. Tonight it was music by Johann Strauss Jr, Liptig and Richard Strauss. Richard composed the most famous of the music in my recollection called Also sprache Zarthustra. It symbolizes sunrise and will likely be a fitting complement to Nessun dorma from Turandot as song I should hear daily. I will post my most favorite on the music page in a bit. Turn it up as loud as you can.

Finally, The Night Listener with Robin Williams, Toni Colette and Rory Culkin. It was the lesser of more dumb or trite evils in the QuickVid machine next door. It’s a good story, a good premise, and a good cast. Just didn’t grab my attention as well as anything else I saw today. So I don’t recommend it enough. Unless it’s free.