I am a big local government fan and when it comes to Chicago we certainly have our share of mudslinging. This time it was for the office of Illinois State Rep in the upcoming election.

The Maria “Toni” Berrios campaign sent us no less than three dozen fliers, a combination of mudslinging and self promotion. To make matters worse, the campaign sent it twice. Why they don’t de-dupe their list is beyond me. Why they feel the need to bombard you with that much mail is also beyond me.

If you imagine each piece is around $1 to produce and mail, that’s $36 just to persuade me. That seems like a lot. Especially because it hasn’t worked.

So, in my very special and passive-aggressive way, I have decided to send all of these postcards back to Toni so she can recycle them. If this is her approach to winning reelection I certainly don’t want to support it.

I have to say that I am appalled someone would send that much mail. And it’s not just the Berrios campaign. Others have sent many. But not that many. I have to create more presentations than I ever expected to. I have had to do them for CEOs. And coworkers. For myself. And clients… And made templates… I didn’t go to school for it. Nor did I plan to.

But the reality is it works well for what we need. But when presentations go horribly wrong, PowerPoint seems to get the brunt of blame for the source of the problem. That’s like blaming a Hummer for all the environmental problems.

A great article from Slate talks about what needs to be done. What it comes down to (for me at least) is know your audience and prepare. Presentations are intended to be presented by you the presenter. Otherwise it would be a report. And just because a report in Word has many words that folks don’t like to read doesn’t mean it’s not the way to deliver the info. When you are putting six, 50-word sentences on a slide… Use Word.

Oh. And another thing: PowerPoint can do just about everything Apple Keynote can do. Just need to take the time. 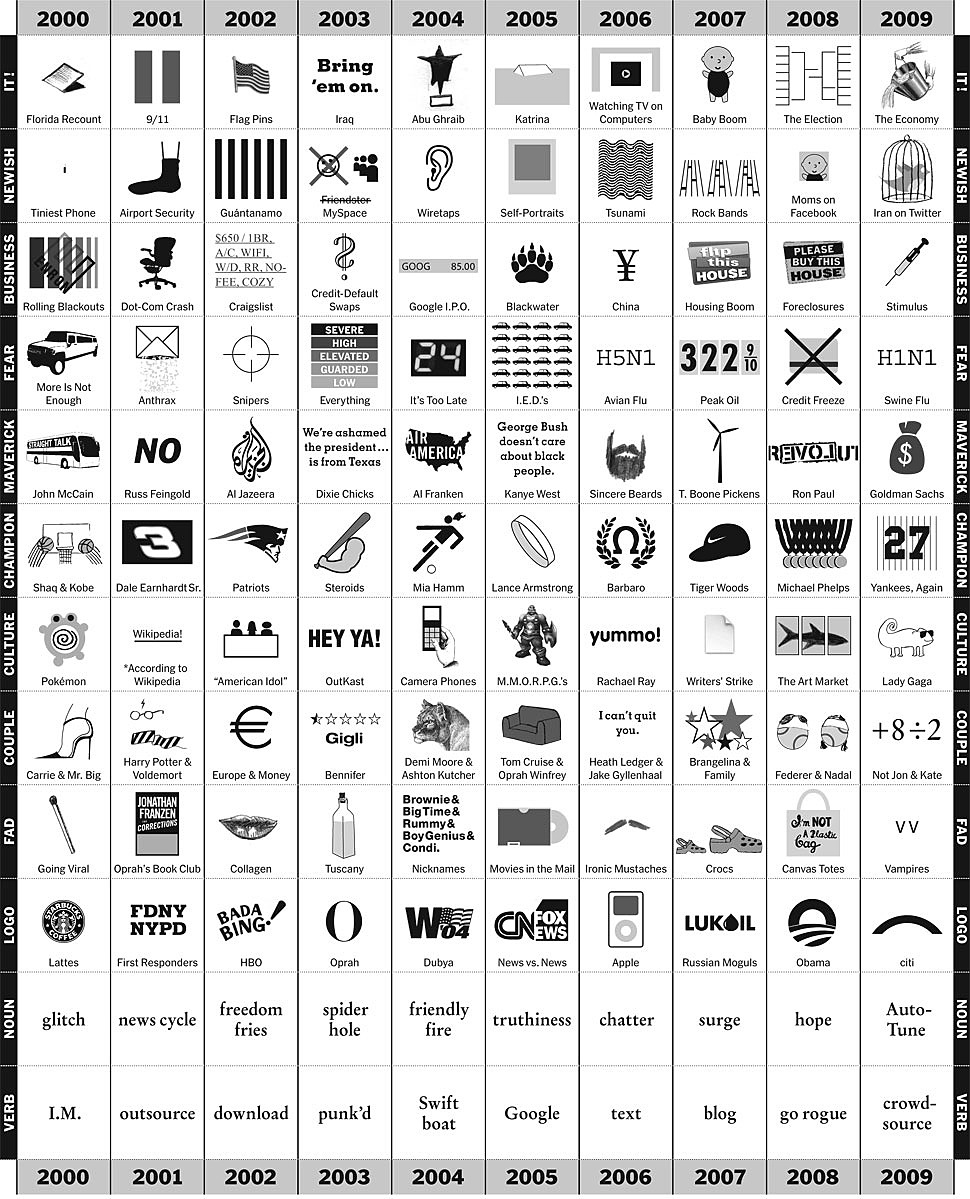 Love these charts! Here is a great example of info graphic charting the decade. Thanks to the New York Times. Visualizing information is excellent, especially done well.

The question of a blog hasn’t come up in a very long time. It seems a bit chest-thumpy and self-serving. And, unfortunately, rarely do organizations have resources to do it well. But there are some success stories out there.

Nuts About Southwest is what a corporate blog should be. But if you can dedicate a team of folks and your personality can support it, then it’s a sure fit. I love how SWA brings fun into their social media presence. On Twitter you’ll regularly be invited to visit a Luv-ly Employee at a gate in a town for a special treat. Their culture supports it and having this outward-facing vehicle is perfect for them.

And what if it’s not a blog, but a one-stop-sharing site? Maybe one where you’ll get a response via Twitter when you ask a question? This is where Ford’s social site The Ford Story comes in. Simple. To the point. And all about the consumer. Even going to far as to say so next to their logo. Excellent! No blog here — but it’s current and relevant. And open. You can see many ways to interact with them. Ford’s social media director Scott Monty (yup, hired JUST to do this) successfully brought buzz to the 2011 Ford Fiesta two years before it went on sale. Fascinating buzz and reaching a very wide demographic. Wanna know how he does it? Well, first of all: he lives it on his very own site.

I assume one of my co-workers placed this full-page article in today’s Chicago Tribune on my desk. (I appreciate that, TT!) To see Adobe taking out a full-page ad in most markets (I assume) is… Hilarious. And to end with the last paragraph? Telling. They love Apple but at the same time they don’t like what Apple’s doing. It will be an interesting two years coming up. And I agree with Adobe: DON’T TAKE MY CHOICE AWAY!

I am going to get grief for this post, but the new Windows Phone 7 series is…Nice looking. It’s also about 5 years too late. In many ways Microsoft reminds me of the big-three: slagging off the last decade or so, resting on their laurels, committing themselves to the lowest common denominator. I was happy to get my Windows Mobile 6-series Blackjack II phone not even two years ago which kicked it off for me. I wanted a not-iPhone and I wanted expandability. Then came the Nokia E71, my most favorite smartphone in the truest sense. And now my Nokia N900 which I am still enjoying every single day, the ultimate convergence device (for me at least).

What is it about the Windows phone? Well, it’s probably the only phone UI I’ve seen that looks gorgeous in a way that’s not ripping off the iPhone in any way. And I like that. It’s actually MORE visually attractive than the iPhone. I don’t know how it plays yet because I’ve not actually touched one. And that’s the problem: manufacturers are flocking to Android and even Samsung is writing their own OS.

Where will that leave Microsoft? Well, they’re going to have to pick up a LOT of speed and quickly. They might even have to partner with the likes of Dell or HTC to develop a phone that blows them all off the map — not an easy task. If the hardware features HD recording, 32GB on-board and card storage, 4G networking and a built-in drop/box/OTA file sync, then maybe it can be a game-changer. Or maybe just a game-keeper-upper.

We shall see. I am intrigued. Not going to buy one (or will I?) but I am going to keep my eye on it.

I have been seeing adaptations of the “Keep calm and carry on” posters all over the city. According to Wikipedia, these were never produced. Instead their resurgence has been as recent as 10 years ago.

It seems a fitting mantra for me as a Buddhist and for everyone these increasingly unpredictable times. I admire its message but also the timelessness of the design and the typography. A quick search on the Interwebs reveals that P22’s Underground Pro is the closest font. Gorgeous.

If this is all too serious, check out this site instead.

Back in February, I visited Digital Kitchen, one of the foremost digital production studios. They’re known for the intros to shows like Six Feet Under and Dexter and most recently the new BMW ads about their 3-series. Thanks to a AIGA’s Small Talk, I spent two hours learning about them. Here are the quick notes:

I am watching the follow-up by director Gary Hustwit. Objectified like Helvetica gives me much to think about, especially about my own life as a designer.

My favorite quote by designer Karim Rashid is paraphrased thusly:

Out of the million chairs that have been designed in the world, how could there be an uncomfortable chair?

If you haven’t seen it catch it on Netflix or on PBS.